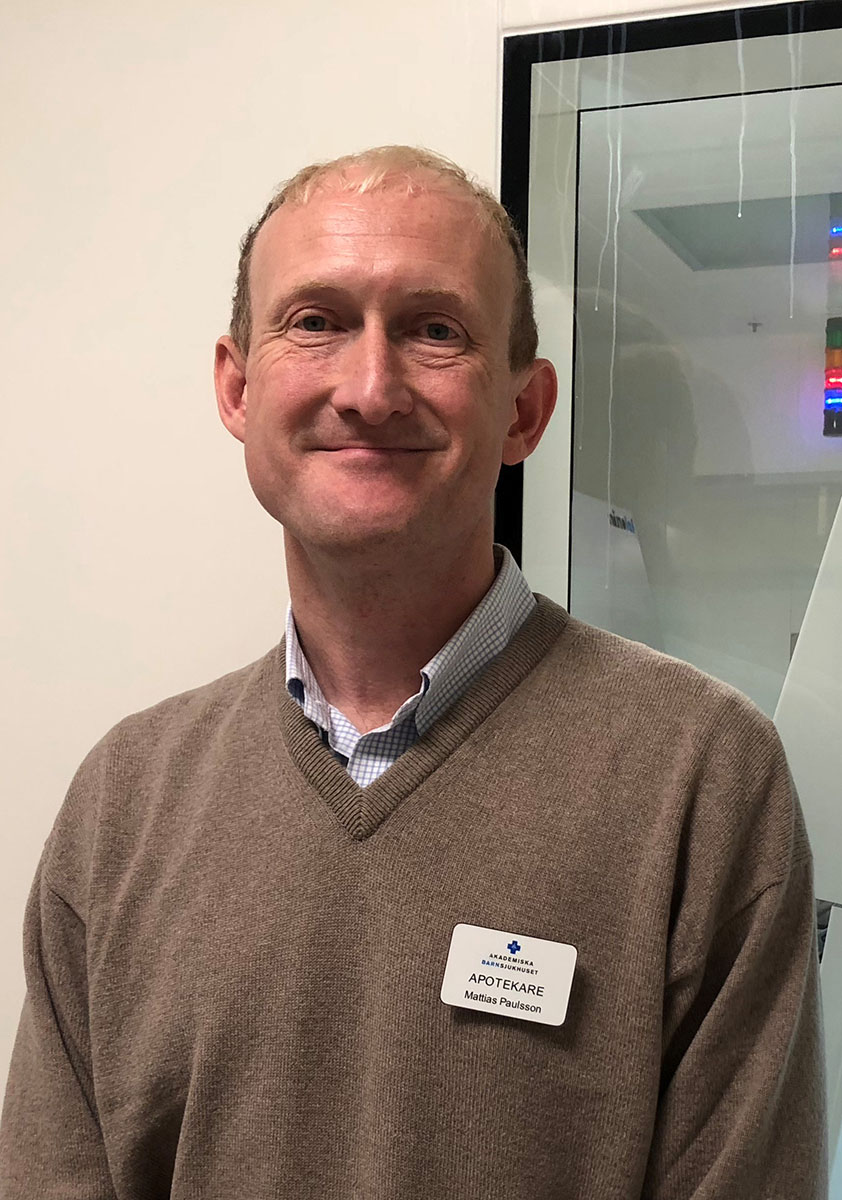 Mattias Paulsson obtained his pharmacist degree at Uppsala University, Sweden, in 1997. Thereafter he started his PhD project at the Department of Pharmacy/Pharmaceutics, Uppsala University presenting his thesis “Controlled Release Gel Formulations for Mucosal Drug Delivery” in 2001. In the thesis, physicochemical principles of pharmacy are used for formulation development for clinical applications. Dr. Paulsson has held positions as formulation scientist at both Cederroth International and Fresenius Kabi. He has been heading the extemporaneous compounding unit of Uppsala University Hospital, preparing radiopharmaceuticals, chemotherapy and other aseptically prepared medications as well as managing the clinical trials unit. He has been a qualified person and held positions with GMP responsibility for compounding units at some Swedish hospitals.

In 2014 he started working with a more clinical approach at the Uppsala University Children’s Hospital with patient safety and optimizing the use of medications from a formulation point of view. He has configured and developed the medication modules of the PDMS system (MetaVision) used at the hospital including the NICU. He holds the position of QPPV (Qualified person pharmacovigilance) for the PET centre at the hospital. He has been managing projects to build new clean rooms, hire staff, purchasing equipment (including chemotherapy robotic automation) and in‐sourcing of extemporaneous compounding units for radiotherapy, chemotherapy and miscellaneous aseptic preparations. From 2019 he is deputy chief pharmacist at Uppsala University Hospital and has several research projects running.

He is involved in both undergraduate and post graduate training of pharmacist in the areas: Parenteral nutrition, IV compatibility, 3D printing, Formulation Science and Compounding. He is supervising three PhD students at Uppsala university

He has been chairman for the Scandinavian Paediatric Pharmacist Group for 2017‐2019 and he was in the steering committee of the ePed Best practice initiative (www.eped.se) for safe handling of paediatric medications based on the EU resolution on medication handling quality. He is a member of UK based Neonatal and Paediatric Pharmacists Group (NPPG) and the Swedish Pharmaceutical Society.

Please feel free to share this...
We use cookies on our website to give you the most relevant experience by remembering your preferences and repeat visits. By clicking “Accept All”, you consent to the use of ALL the cookies. However, you may visit "Cookie Settings" to provide a controlled consent.
Cookie SettingsAccept All
Manage consent

We use cookies to improve your experience while you navigate through our website. Out of these, the cookies that help us to help you the most are in Performance and Analytics. The cookies that are categorised as necessary are stored on your browser as they are essential for the working of basic functionalities of the website. We also use third-party cookies that help us analyse and understand how you use this website. These cookies will be stored in your browser only with your consent. You also have the option to opt-out of these cookies. But opting out of some of these cookies may affect your browsing experience.
Necessary Always Enabled
Necessary cookies are absolutely essential for the website to function properly. These cookies ensure basic functionalities and security features of the website, anonymously.
Functional
Functional cookies help to perform certain functionalities like sharing the content of the website on social media platforms, collect feedbacks, and other third-party features.
Performance
Performance cookies are used to understand and analyze the key performance indexes of the website which helps in delivering a better user experience for the visitors.
Analytics
Analytical cookies are used to understand how visitors interact with the website. These cookies help provide information on metrics the number of visitors, bounce rate, traffic source, etc.
Advertisement
Advertisement cookies are used to provide visitors with relevant ads and marketing campaigns. These cookies track visitors across websites and collect information to provide customized ads.
Others
Other uncategorized cookies are those that are being analyzed and have not been classified into a category as yet.
SAVE & ACCEPT
Powered by